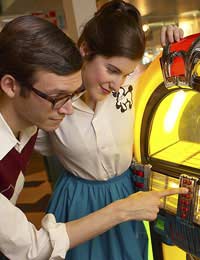 Why not jitterbug the night away with an awesome 1950s inspired rock and roll party! Perfect for anyone celebrating a 50th birthday or anniversary or as a fund-raising night or just a great celebratory get together!

The 1950s heralded a real social change - it really was the era where youth culture first emerged and young people let their hair down at dances and hops, and all to the new sound that was rock and roll! So dust down those Elvis LPs, slick on that Brylcreem or poodle appliquéd skirt and get ready to jive!

Send your invites out on kitsch 1950s postcards, or make your own cards in the style of a retro jukebox, with your party details on the selection buttons, or on the centre label of a cut out of a 45 record - or you could even use real 45s for an authentic touch! Use printed images for your invites that really sum up the era of the 1950s -American cars, or film stars and pin ups. Simply stick your invitation on the reverse of the picture.

You can really go to town with decorations for a rock and roll party! Go for full on vintage kitsch with an American diner theme - accessorise your party space with piles of old records, posters of stars such as Elvis and Buddy Holly, Marilyn Monroe and James Dean. If funds allow, hire a jukebox, and light your room with retro lava lamps.

Theme Within a Theme

How about having a theme within your rock and roll party? You could go for a Happy Days, Grease or West Side Story event?

Go for an American diner vibe with hamburgers, fries, waffles and pancakes washed down with milkshakes, cola and fruit cocktails with plenty of glace cherries on sticks, umbrellas and swizzle sticks!

You and your guests will be spoilt for choice when it comes to rock and roll inspired fancy dress! You could include a list of suggestions in with your invitations - how about:

Check out 1950s compilation albums, or mix your own party tracks with a selection of your favourite artists - you won’t go far wrong with plenty of Elvis Presley, Buddy Holly, early Cliff Richard and Bobby Darrin. If in doubt, just keep it fast, upbeat and loud!

Host your very own dance off and get your guests jiving and jitterbugging their way to a prize - who ever lasts the longest on the dance floor is the winner!

Search the internet for celebs who were born in the 1950s and find childhood or old pictures of them - have your guests guess who they grew up to be!

Have a fancy dress competition with main prizes and booby prizes - essential for the person who will undoubtedly turn up with nothing more 1950s about their appearance than a rapidly flopping quiff!